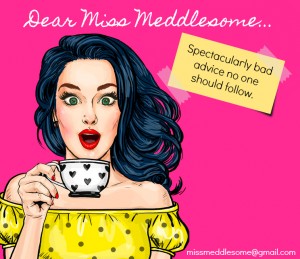 Before I dive in, I wanted to take this opportunity to thank you all for joining me here today. It’s the maiden voyage for Dear Miss Meddlesome and I’m honored you joined me. I also want to add that a lot of these submissions were pretty brave. I wasn’t expecting such serious subject matter for some of them and I hope you can see the sarcasm through everything I’ve responded with. If you submitted, I think you’re all pretty bad ass, actually, and just want you to know how thankful I am that you decided to play along. It just goes to show you that every single one of us is struggling with stuff, yet we power through with determination and a sense of humor.

Let’s jump right in, shall we?

My parents separated after 40 years of marriage and now my dad lives on my couch. It’s been over a year and he shows no signs of leaving!!!! Between the toilet seat and him controlling the TV and thermostat I feel like I’m 12 living at home and not a grown woman whose name is on the mortgage!!! Do I tell him to find a different place or let him continue sleeping on my couch?!?!?

How dare you. The man’s wife just left him! He’s entitled to a year’s worth of couch surfing at his daughter’s expense. Those braces weren’t free! So what if you fall in the toilet every morning, groggy, and downtrodden from missing your favorite show the night before because the remote was welded to his hand. Yeah, he was audibly snoring but he’s just “resting his eyes.” It’s a small price to pay when you think of the money he’s saving you by setting your thermostat at eighty degrees. What about the pony he bought you when you were six? What about your quinceañera? The five hundred yards of tulle for that dress wasn’t cheap, missy! Let’s not forget the Aston Martin he bought you when you graduated. I’m making some safe assumptions here.

Since you came to me for advice, though, I suppose I should formulate a few plans to help you get him out. I do love a good ousting, so here we go…

Plan A: The Chandler Bing

Tell him you’re moving to Yemen. Have him help you pack up your house. Once he’s left of his own accord, have him drive you to the airport to make it look convincing. Somehow get a phone number with a Yemen country code that forwards to your cell. Learn a few greetings in Arabic. Park your car in your garage every night. I know it’s a sacrifice, but no family get together’s for at least a year. Who are we kidding here? This is the one silver lining. And remember, you’re in Yemen, and visitors are expected to give pens or sweets to the local schools. Your dad will probably know this, so make a big showing out of buying these things to “take with you.” This is not a big deal because you can never have too many pens and candy, well, candy is the greatest gift to man next to Sonicare toothbrushes and agitator washing machines, which have nothing to do with Yemen, but felt necessary to mention. They never get the recognition they deserve.

Plan B: If Mama Ain’t Happy, Ain’t Nobody Happy

Have your mother move in. This feels self-explanatory, but it’s important to mention one key point. You must force them to share a room. In doing so, you run the risk/reward (depending on how you look at this) of them getting back together. Either way, though, he’ll be gone prrrrreeeeeeetttttyyyy quick, yo.

My husband is the worst kind of douche canoe.

That’s right. He’s the asshole who leaves the shower faucet on, so when I get in to take a bath later, I’m blasted in the face with ice cold water. Usually on days I don’t want to wash my hair. I’ve asked him time and time again to please to turn the faucet off when he gets out, but he still hasn’t listened.

How can I resolve this without simply murdering him when he sleeps?

You’re high maintenance. High maintenance and a little stabby, apparently. I haven’t missed the irony in that this is a shower scenario. #Pyscho Anyway, I get it. You want to be able to slide into your tub without the rude awakening that supposedly inspires murder (or pregnancy). A slight overreaction, but fine. Listen up, Buttercup, grab a Sharpie. Then, while he’s sleeping, write ‘Drench Mensch’ on his forehead. If you’re not sold on ‘Drench Mensch’, get creative. Try ‘Shower Power’, ‘Water Boy’, ‘Drizzle Dizzle’, ‘Patter Splatter’, maybe ‘Pissed Mist’. These are all acceptable alternatives. Anyway, when he gets out of the shower and glances at his reflection, he’ll see your message and know exactly what it means. He’ll think, “Wow, my wife is so helpful!” Then, after he pushes the diverter back in (I had to look that up), he’ll think, “Should I get her roses or lilies or maybe the bones of my ancient ancestors as sacrifice today?” The added bonus is that the Sharpie will stay on for days. You’ll only have to reapply once or twice a week. It’s foolproof.

If this doesn’t work, it’s helpful to know that stripes are, like, totally in this year.

My ex husband is living with his new girlfriend. When my kids come home from their weekend visits, I’m finding out the new girlfriend is doing things like teaching my oldest how to use tampons and taking my youngest to get haircuts, without ever discussing it with me first. I think this is crossing the line.

What should I do?

I said hold them! Does anyone have a hair tie! She better recognize because I am not playing.

It’s time to plot annihilation…I mean, heh heh, revenge. It’s time to plot revenge. (Wait, that’s not that different.) First thing’s first, I’m the realest. Compile a list of where she works, where her parents and friends live, and places she frequents. Once you have this, it’s important that you troll her Facebook page. Find a picture she’s been tagged in, one she would have never approved of if she’d been able to veto, one where she looks like absolute dog poop. You know, her natural state. If you’re handy with Photoshop, brush up those skills. If not, find a graphic designer who has no qualms with shady because things are about to go down, Miss Brown.

We’re going to be making a few posters. Poster number one, “This lady gave me the herpapees!” Poster number two, “This woman stole $500 from my grandma!” Poster number three, “Caught in a compromising situation with a llama!” Poster number four, “Former Miss America stripped of her title as videotaped evidence was found of her claiming the earth is actually flat and we, as a people, can’t be associated with such utter nonsense.” (That one might be a little long.) Poster number five, “Eats her own toe jam!” Poster number six, “Can’t pronounce the word reconnaissance, let alone knows how to spell it.” Add the subtitle for that one, “Doesn’t know what it means, either.” Poster number seven, “Drinks pickle juice. That’s disgusting.” Poster number eight, “Plays mom to my kids and witch’s gotta go!” Poster nine, “Doesn’t comprehend appropriate boundaries.” Poster ten, “Has never heard of Toxic Shock Syndrome.” Poster eleven, “Poor choice in men.” (I’m assuming here.) And Poster twelve, “Trying too hard.”

Now, it’s time to post these suckers in their neighborhood, at her work, at the stores she frequents, and her family’s neighborhoods.

I plead the fifth,
Miss Meddlesome

I’ve recently found myself back on the market after nearly 15 years of marriage. I haven’t dated since I was 19, so it’s safe to say I’m fairly rusty in the flirting/dating department. There is a certain someone who I see at work that caught my eyes several months ago and things have progressed to a little flirting and some not-so-innocent Snapchat exchanges. My issue is that he is very wishy washy and I never know if he’s going to give me a big hug when I see him, or if he’s going to ignore me completely. Lately, he only acknowledges my presence if no one else is around. I sound like a teenager, but my relationship experience is on par with a 7th grader at this point lol! I need help! What do I do? How do I not come off like a 12 year old?

So you’re out there! You’re a part of the ocean again and you’re swimming around with the other fish and they have duck lips and are taking thousands of selfies and you’re like, what the hell is this? I’ve never seen this specific species before with their shaved chests and pomade hair, but okay, whatever. You’ve jumped in and the water’s cold as crap but you’re in.

First off, I want to commend you on your very excellent choice of sending naughty Snapchats to a flaky workmate. I think this was a good choice on your part and couldn’t possibly backfire on you. Plus, nothing demands respect from a man like reputation damaging screenshots he learned how to take secretly through wikiHow.

Now that we’ve acknowledged what great footing you’ve established, let’s explore his waffling approach to your interactions. Whoo! How hot is this? Somebody get me a glass of lemonade! I love a man who pretends I don’t exist one minute then deigns to do so the next. #Maturity Add in the fact he only seems to notice you when no one else is present and you’ve got a recipe for a match made in heaven.

This is my very sound advice for you. Keep all of this up. Many will tell you that you should stand up for yourself, demand that a potential significant other openly and respectfully recognize you among your peers, but I think this would be a mistake. I believe, with time, he’ll build enough respect for you via these sneaky rendezvous to chase you down the corridors at work, shouting your name in reverence. This seems inevitable to me. Everyone knows a man who refuses to acknowledge you unless it’s under his terms is a man to be trusted.

It’s time to let his inconsistent behavior be your guide. Dependable men are boring so let this gem have his cake and eat it too. When he ignores you, overlook the pit in your stomach. This means he’s starting to respect you! When he hugs you privately after making sure absolutely no one is around to see you both, don’t be offended by the fact he appears to be ashamed of you. It only means he’s building genuine admiration for you!

And whatever you do, do not recognize your own worth. Do not demand respect. Do not let him work toward earning you instead of the other way around. Do not let yourself think you deserve more.

Have a personal problem you really need help with? Miss Meddlesome will try her hardest to ruin your life with spectacularly bad advice. Write her at: MissMeddlesome@gmail.com

Disclaimer: Under no circumstances should you actually follow this crap advice. If you do, you’re an idiot.